The market in general August 2020

Due to the measures taken in the fight against the coronavirus, the supply situation from many countries of origin continues to be very uncertain. Harvest workers are unavailable, transport options are limited, factories have to work at low capacity, delays in the processing of exports and much more. The coronavirus continues to spread strongly worldwide - Peru, South Africa, India, the Philippines once again and now Vietnam, for example - the development is continuing to be highly dynamic. Long-term planning and stockpiling is essential to secure supplies also from the current harvest season.

Unexpectedly poor catches in the East Pacific, and the first period of catch restrictions (29.7. to 8.10.) which have now taken effect there, have led to a rapid increase in the prices of Skipjack in Manta. After a low of USD 1,100/t in April, the prices there are now just under USD 1,600/t. The initial “veda de pesca” is to be followed by a second catch restriction, from 9.11. to 19.1. With the introduction of the “FAD ban” in the West Pacific at the beginning of July, prices in Bangkok have also risen to a similar level. Restrictions due to the coronavirus on both fishing vessels and in the factories are amplifying the volatility of the tuna market, which even under normal circumstances is one of its distinguishing attributes. New opportunities are set to be offered by the Free Trade Agreement between the EU and Vietnam which took effect on 1.8. Duty-free imports of tuna remain limited by an EU quota, however. The demand for MSC-certified tuna continues to increase; we are now also offering MSC chunks and flakes packed in pouches.

The exceptionally strong demand for canned tomato products is driving the market, which has to be supplied from the current harvest without any overhangs from 2019. The price level, which had risen already in April climbed further in the course of the season. It took growers and packers in southern Italy until the end of July to finally agree on raw material prices at a significantly higher level than last year. We believe that the price trend will continue unbroken. Despite a satisfactory crop and decent yield forecasts for the harvest which has now begun, supplies from Italy/Spain/Portugal may be insufficient. We are once again looking into options from China as well as from Chile early next year. The new harvest for dried tomatoes from Turkey is entering an empty market. A lot of fruit was grown, but late rainfall in June has resulted in a high reject rate, which means the raw goods are only suitable for tomato paste. However, rising costs can still be cushioned by the very weak Turkish Lira. The harvest will continue until the end of August – be sure to coordinate your annual requirements! There is a good and sufficient supply of frozen semi-dried tomatoes from Turkey.

The harvest in Turkey for Capia and Topa peppers is now going well after the late rainfall in June delayed its start. With good demand, also domestically, the big producers are largely booked up. In EUR, prices are roughly at the previous year’s level, with the weak Turkish Lira compensating for the higher costs. Inflation is rising though ... the “old game”. Similarly, we are expecting a balanced market for the supply of mild red and green chili peppers (Lombardi and Macedonian).

With good stocks from the last harvest in South Africa the supply to the market is pretty decent, Morocco will find it hard to push through higher prices from the harvest which is now underway. Supply seems sufficient until the next season harvest starts in South Africa in December. We also offering organic quality and frozen cherry peppers (pieces, approx. 6x6 mm).

The harvest has begun in Fujian and Guangdong, China. It has come to light that producers in Guangdong have been unlawfully collecting subsidies in recent years; they are now being pursued and brought to book. It is therefore likely that the cheap prices there, which have been inexplicably low, will soon be history. Reliable packers from Fujian are offering prices that are slightly above last year’s level; we recommend annual contracts to be concluded now.Garlic: The harvest in China went well, both in terms of quantity and quality. Accordingly, the market started at a favourable level, although there is now speculation again as intermediate buyers are attempting to control and limit the supply. The effects of this are mainly being felt with dehydrated garlic, although frozen garlic and garlic in brine are also being affected. Please coordinate your requirements with us, we are following developments closely with the help of our local representatives.

It is off-season in Thailand now, the factories have closed early, most won’t reopen for the winter harvest until October. In total, less than 900,000 tonnes of raw material is expected in 2020, about half as much as the average from the last 10 years, and that’s after a yield in 2019 that was already very weak! Things will only improve in Thailand from the next summer harvest at the earliest. Even the much smaller-scale sources in Indonesia, the Philippines and Kenya are sold out well into next year. We urgently advise to cover your requirements now until early summer of 2021, and to ensure reliable supplies as quantities still available are very limited. We are also offering organic-quality pineapple chunks as well as organic crushed pineapple.

The harvest in India is now over, the yields for Alphonso are significantly lower than they were last year, pure Alphonso pulp is sold out, blends (Totapuri, Kesar) are still available, firm price level. The supply of mango chutney has returned to normal, but the supply chain has been severely impacted by coronavirus restrictions causing shipping problems.

After the damp and cold spring, a rainy and stormy June further hampered the current harvest in Greece, so the yield is set to be below that of 2019. The price level is rising, in addition to higher shipping costs.

The unfavourable weather during the flowering period has led to a poor harvest in Turkey, roughly 15% below the yield in 2019, which was already unsatisfactory. Small calibres are particularly scarce and organic qualities are set to be sold out very early. Check your requirements now and secure your supply!

We are now offering conventional and organic jackfruit in large tins (A10), in chunks, and also in “shredded” form (crushed pieces). We will be pleased to provide samples. Jackfruit is becoming increasingly popular as an organic meat substitute

Yields are particularly weak at present in the low season due to the continuing drought in Indonesia but also in Malaysia and Sri Lanka. Stocks have been cleared, the price level is picking up again now that demand is strong. Organic coconut milk is in short supply; prices are going up.

All-clear again for now in Peru, the May/June harvest has arrived, both the supply situation as well as the price level have normalised following the end of the lockdown in Peru end of June. We are also offering organic quality and new instant quinoa (pre-cooked and dehydrated).

Cultivation has been smaller in both the USA and Italy and thus a considerably lower volume is to be expected. The yields from the current harvest (July-September) in Russia and Turkey are expected to be at normal levels, by contrast. Excess stocks have been completely eliminated, prices will continue to go up. We are strongly advising to cover long term requirements. In addition to canned and dehydrated chickpeas, we are also offering chickpea flour in various mesh grades. Organically grown chickpeas are also available.

The harvest in Turkey (June-July) went well; we are also expecting normal to good yields from Canada (August-September). India is acting as a strong buyer as the import duty there has been reduced from 33% to 11%. In general, the demand for pulses has increased sharply, and the market for red lentils is also strengthening significantly after a favourable price level in 2019.

The wheat harvest in Turkey is complete, and both the yield and quality are below expectations due to weather conditions. The price level has increased slightly in comparison with last year, we are expecting it to remain stable for the time being, but we strongly recommend to cover your requirements for the next 12 months without further delay. We are also offering organic brown and yellow bulgur in the grain sizes of coarse/medium/fine, packaged in 25 kg bags.

Demand is rising and we are now offering an increasing number of product groups in ORGANIC quality. The recent ORGANIC audit was successfully completed once again, our current certificate is available here. 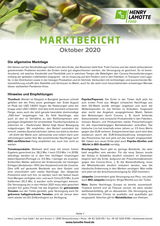